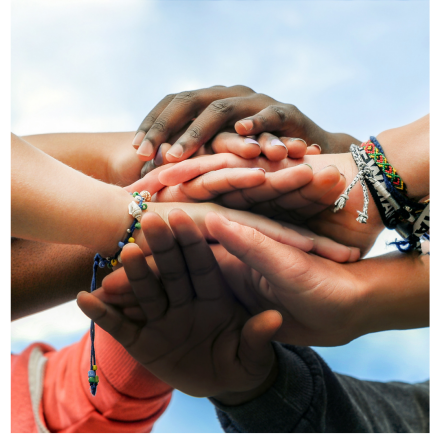 At its January 2021 meeting, the Session passed a proposal from the Witness Committee for a 2021 Antiracism Initiative. Their decision was based on a call to action by the 2020 General Assembly, a statement from the Presbytery, and a letter from Ruth Reynolds called "A Call for Reconciliation and Community Building." The purpose of the initiative states, With the increasing recognition of the violence sustained by black, indigenous, and people of color, and with the growing awareness of the church's complicity in racism from our earliest history, the purpose of the initiative would be to educate, discuss, and suggest actions to be taken to support our brothers and sisters of color in whatever way we can.

In March, seven people from Faith participated in a Civil Rights Bus Tour in Alabama. One participant, Michele Hood, shares her reflections from that tour:

Love is inarguably a central tenet of faith in Christ.
John 3:16
For God so loved the world that he gave his one and only Son, that whosever believes in him shall not perish but have eternal life.
‭‭1 John‬ ‭4:7-8‬ ‭NIV
“Dear friends, let us love one another, for love comes from God. Everyone who loves has been born of God and knows God. Whoever does not love does not know God, because God is love.”
‬‬
‭‭Matthew‬ ‭22:37-40‬ ‭NIV‬‬
Jesus replied“ ‘Love the Lord your God with all your heart and with all your soul and with all your mind.’ This is the first and greatest commandment. And the second is like it: ‘Love your neighbor as yourself.’ All the Law and the Prophets hang on these two commandments.””
Slavery’s roots in war and economic domination is evidenced through world history. In 6800 B.C. The world’s first city-state emerged in Mesopotamia. Land ownership and the early stages of technology bring war— in which enemies are captured and forced to work: slavery. Exodus 8:1 Begins with the Lord telling Moses to go to Pharaoh, telling him “Let my people go so that they may worship me.” And every time Pharoah refused, he sent a new plague upon the land.
I participated in the Civil Rights Bus Tour through Montgomery, Birmingham and Selma, Alabama. The memorials and museums were steeped in the pain of millions of people. I was shocked to learn that 12.5 million Africans were kidnapped and sold into slavery. Nearly 2 million people died on the voyage across the ocean. Nearly half of those who survived, were separated from their children, spouses, parents or siblings during the domestic slave trade. After slavery was abolished, racial terror lynchings emerged for the purpose of re-establishment of white supremacy after the Civil War. These lynchings were distinct from hangings and mob violence committed against white people and other groups because they were intended to terrorize black Americans and enforce racial hierarchy.
“Unlike frontier justice in the West, racial terror lynchings generally took place in communities with functioning criminal courts that were viewed as too good for African Americans; despite its lawlessness and terrifying unpredictability, lynching was sanctioned by law enforcement and elected officials. Racial terror lynching was characterized by extreme violence: victims were tortured for hours before their brutalized bodies were left out on display to traumatize other black people. Members of the mob frequently documented their atrocities by posing for photographs with a
dangling, bloodied, or burnt corpse.” - Plaque at National Memorial for Peace and Justice, Montgomery.
This belief in racial hierarchy survived slavery’s abolition, fueled racial terror lynchings, demanded legally codified segregation, and spawned our mass incarceration crisis. Today black Americans are almost 5 times more likely to be incarcerated than whites. The Equal Justice Initiative (EJI) says the dehumanizing myth of racial difference endures today because we don’t talk about it.
How do we reconcile this with with our faith? How can we love our neighbor as ourselves and remain silent while our brothers and sisters are treated with such indifference?
Slavery was abolished, but the hearts of men are still hard. We must confront our history of racial injustice. We have come so far, but we have so much farther to go.
EJI’s Community Remembrance Project is empowering communities to change the physical landscape to honestly reflect our history. And inspiring people to visit Montgomery, Alabama, to learn and reflect in their Legacy Museum and the National Memorial for Peace and Justice.
In the words of Martin Luther King Jr. from a Birmingham jail to white clergy. “Now is the time to make real the promises of democracy. Now is the time to rise from the dark and desolate valley of segregation to the sunlit path of racial justice. Now is the time to lift our nation from the quicksands of racial injustice to the solid rock of brotherhood. Now is the time to make justice a reality for all of God's children.”

Our Resolve Against Racism: An FPC Credo Project

I invite you to confess what you believe and resolve to do to eradicate racism with your whole heart, your whole mind, your whole soul.  This credo is voluntary and to be inspired by the Spirit.  It is to be a living credo, written on our hearts, not etched in stone.  While it is to be authentic, it is not the whole truth of what we must believe and resolve to do.  Take your time, pray about this, ask the Spirit to convict you. Then I invite you to submit it through our website so that it may be compiled and shared as a part of our congregations resolve against racism.

To lead the Antiracism Initiative at Faith, a Task Force is being formed which will plan programs and perhaps trips for education about racism. The Task Force is comprised of members of the Witness Committee and the Adults & Families Committee as well as members who express a personal interest in serving.

If you have any questions or comments about this effort, please reach out to Anita Parish, .